Furlandia was a blast but I need to catch up on a few thing before I start working on con report on 21 and 21 may there were two events First Serena Kitty hosted a bowling meet. The number was … Continue reading →

Yesterday was The Furry Easter Egg Hunt Eggstravaganza and potluck at Serena Kitty house. The weather was perfect and fellowship great. I took my 18in Hello Kitty Plush with me and had a fine time. One thing I like about … Continue reading →

The theme:  Apocalypse How?

Orycon is the premiere Science Fiction convention in Oregon.  This Year my big Hello Kitty Plush was the accompanying plush.

Not wanting to take an unpaid time off, I went to and left work early. First stop was registration, it went very fast. Next I attending the rest of the AMV clinic, now having some tools I some question, now just getting but to sit down and use them.  I was distracted and missed a few panels, others panels that were published for the program you own con did not happen. The convention did not get off to a good start.  I went to opening ceremonies. It’s not a good omen if the opening ceremonies’ were sparsely   attended; no more that 30 people attended.  I went out to dinner and came back for the DoubleClicks Concert, they are a nerd-folk duo based in Portland, Oregon that plays songs of Star Trek, D and D, finding geek love, (in the wrong places). I seen part of their set at Rose City Comic Con; they were excellent and very funny. I got a cheap beer afterwards and went home for the evening.

I side to go for the breakfast buffet at the Hotel.  I got sidetrack from any panels I wanted to attend because I spent a good part of the morning in video room watching the British Hitchhiker guide to the Galaxy in all its 1980’s cheesy special effects.  I wanted to see how they handled deep thought and the dish of the day. Lunch go diverted to the con suite, it was a bit touchy when Occupy Portland jerks used the park across the hotel for their protest.  There not much in the way panes so I did a little reading room roulette, I just sat in reading room and waited for whoever to arrive for their reading, I got Richard A Lovett; I was impressed I bought a book of his short stories and ran Mary E. Lowd and blow the rest of my con book budget, picking up Otters in space.

Latter I went out an early dinner because I want to attend a show of Children of Terra Firma, a film by local independent SF/fantasy film makers. I got a taste of independent SF and fantasy films at Northwest Wonder and Rose City comic Con, it started to become an interesting niche for me.  After than I hung around and cruised the room parties. There we all types some with adult beverages some with not. There was a party for everybody.  Finally I went down to the main floor to catch Guy’s AMV viewing; do  to a temporal shift caused by a flux capacitor demonstration, quantum physics prank  or daylight saving time ending, stayed to  2:00am but the time shifted back to 1:00AM and I  did not leave to con till 1:30AM.

After church I rushed down to catch the Origin of fandom panel, this was a very interesting panel dealing with the origins of the Science Faction Fandom. The big takeaway was it was started in the 20’s by young men and teens creating clubs. Often these clubs did not last long because of the 3 / 4 rule: three votes for A, and four voted for B. The description of the clubs and drama remind much of furry fandom today; furthermore, the big flap over excluding six Futurians for the fort Worldcon in 1939 reminds me of the Uncle Kage vs., Insane Kangaroo today. One of the panels know the early pioneers of the furry fandom, to bad I could not have a longer talk with him.  The rest of the time I tried to run out the clock hanging around the con suite and video until it closed because I had a furmeet at 7:00pm. Failing I left the con around 5:00pm.

I love the Doubleclicks concert

The Origins of the fandom panel.

Programming, notwithstanding Orycon did improve the panel’s selections over last year, but my beef with publishing of programming. For example Orycon wanting until the last week to publish the schedule on line and while a great idea, not publishing the create you own con until a few weeks before the convention. We not given enough time to create a panel we need at least a few months to properly prepare ourselves.

Sparsely attend opening ceremony. I been to past Orycon, Kumoricon,  and Ranfurrest,  Even smaller cons like  Furry Fiesta 2009 and  All Fur Fun. I never see pitifully attended opening ceremony. Perhaps its time to The Not Ready For Sidereal Time Players to retire.

Ugly Political correctness and identity  politics  There was  a big flap over the Autism panel it seems they did not  have somebody  with autism on it, Now having  a High autistic brother I was interested in it but after  seeing  the profanity written post on other sites, I can now see why Orycon  canceled the panel. 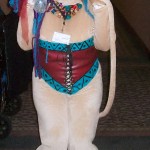 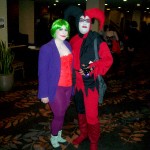 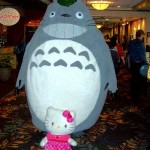 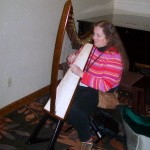 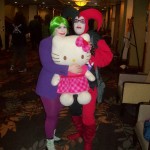 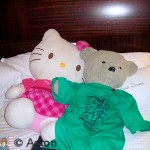 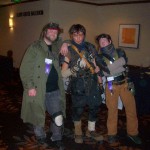 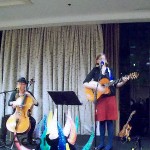 Over all I felt had a very good time, except for a few hitches I say Orycon 34 was much improve over Orycon 33.

Rainfurrest is a Furry convention held every year at the Sea Tac area. My large chococat was the accompanying plush. This was my return to Raifurrest aft a two year absence.

Thursday: I got up and rush to the Amtrak train station. Because of the condition of my truck I decided  to take  the train up especially after my plans  for renting a car fell through.

I got to the hotel The Hilton Hotel and Convention center store my stuff and head out for lunch, then set up in my room and attended the opening ceremonies.. I have to say the stage set up was a fry cry form the first Rainfurrest 2007. The opening ceremony was in what would have been a smaller panel room today and for guy in front.